Apdex is a simple scoring system which is an open standard developed by an alliance of companies as a standard method for reporting and comparing the performance of applications. WebTuna has calculated Apdex for some time and exposed it through our REST API but today we have added visibility of the Apdex score into the WebTuna Performance screen. 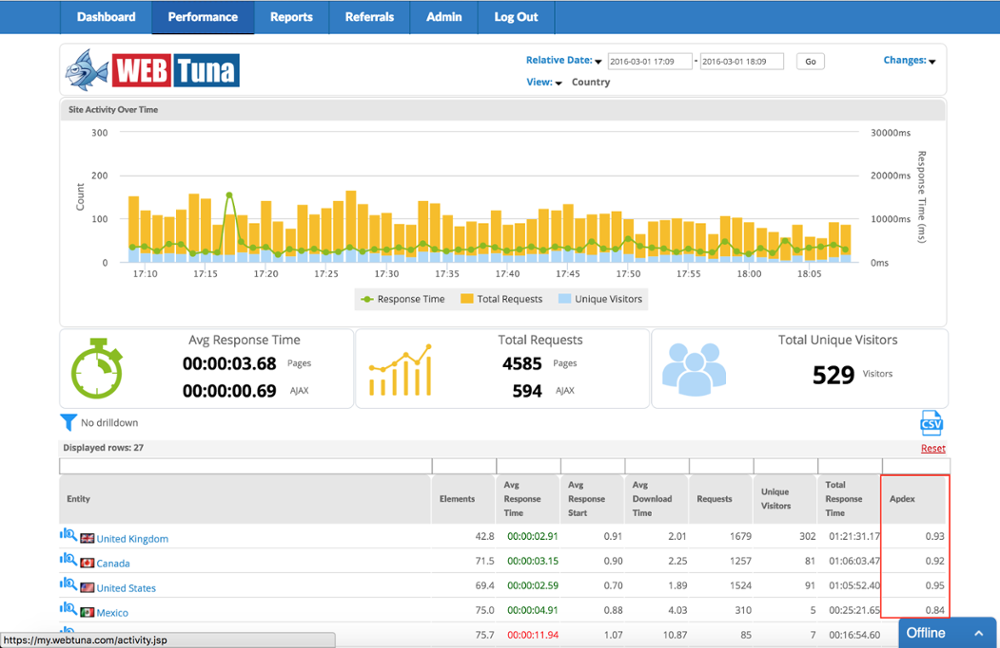 WebTuna calculates the Apdex score for every single page or AJAX request that is captured and categorises it into one of the 3 categories (Satisfied, Tolerating or Frustrated). That measurement is then used to calculate the overall score using the formula below.

The three zones are defined by two thresholds: T and F, in seconds, as follows.

For example, if users perceive response time as tolerable beginning at 4 seconds then they will be frustrated at greater than 16 seconds.

In WebTuna T is defined by the target page load time for the site which is defined under Domain Target Page Load Time on the Admin screen.

Apdex score is calculated as:

To achieve the optimal Apdex value of 1.00, all users must experience satisfactory performance. If some users see tolerating or frustrating performance, then the index rapidly dips below 1.00. For example, if 80% of users are satisfied and 10% are tolerating, while the remaining 10% are frustrated, the index is 0.85.

What is a good Apdex score?

For more information try these sites: